Spectrum of Truth – Is Truth Really Black and White?

The Truth is Not Black, White, or Grey…

What do you think? Is truth as clear as black and white, or is it grey and less defined? Should we maintain black and white thinking, or is life too complex for that? We’ll get to this in a moment.

I am planning on focusing on colors, color theory, and color psychology for the next several posts.

Colors are, understatedly, such a beautiful and emotion-filled thing, and i believe that understanding and getting a feel for our own personal thoughts about them, as well as other perspectives, will be core to our journey in analyzing the stories told through fashion.

The following writing is a short essay i wrote in a college class that illustrates the complexities of truth using color as an analogy. I thought maybe it could be some interesting food for thought and discussion before we delve into this series on color.

What is Black and White Thinking?

Black and white thinking, or splitting, is the idea of seeing things in one way, either good or bad, right or wrong, with no other possibilities. It’s thinking in absolutes and extremes. It’s a mental process that people use to try to simplify the world around them.

Some people think that black and white thinking is healthy because it helps them to make decisions quickly. Others argue that this type of thinking can be harmful because it prevents them from seeing all the possible angles to a sceranio, or solutions to a problem.

When we see the truth as black or white, It can lead us to get stuck in mindsets that may not actually be healthy or beneficial to us. It can also lead us to judge people for having other ideas…Even if their ideas are just as valid as our own. Worse yet, it can cause us to judge people as valuable or not. It can do a lot of damage.

Spectrum of Truth – An Essay Challenging Black and White Thinking and Grey Thinking:

How dull it is to see reality only as black or white; and how faint it is if it’s merely seen in multiple shades of grey. Truth cannot be fairly represented in either. There is rarely a stark, contrasting clarity of right versus wrong, as is seen in black versus white. But the ambiguity of grey, and attitude of “anything goes”, is lacking as well.

Life consists of a vivid variegation of color. A rainbow.

I will be using red for consistency in this example:

Red can never be blue–call it “blue” all you like, but it will not change to a shorter wavelength. The only commonality those two colors even share is that they are colors, refracted from light.

Red has many hues, and my preferred version of it may be burgundy while yours may be crimson–both are still a beautiful red. In Spanish, they call it “rojo”, French: “rouge”, Mandarin: “红色的” (“Hóngsè de”), but we’re still talking about the same color.

But navy, cyan and azure are not options under the category of red. Neither are “azul”, “bleu” and “蓝色的” (“lánsè de”).

Burgundy is a form of red and cannot exist in separation from it.

And burgundy isn’t crimson, maroon or pink, even if it’s misunderstood to be since they are all similar and fall under the category of red. It’s its own variety of red, with its own lovely differences that set it apart from other varieties.

But truth also varies based on context and condition and makes sense in connection to that context; and what’s right in your context may not be right in another; But within that context, it still is what it is.

Green contrasts red as its opposite.

Purple is not red, but red is found in it; so purple is partly red. And red is no longer truly red if mixed with blue. Neither is purple fully purple if lacking blue or red.

Similarly, things true and things untrue also have connection to each other. Things untrue cannot exist without truth first being established. Lies oppose the truth.

Some things can be true in part but not in whole. And at the same time, things considered true can be tainted by what isn’t true–if something isn’t fully true, whether it lacks truth or contains lies, how can it be called true?

Understanding things untrue can help us understand what is true. 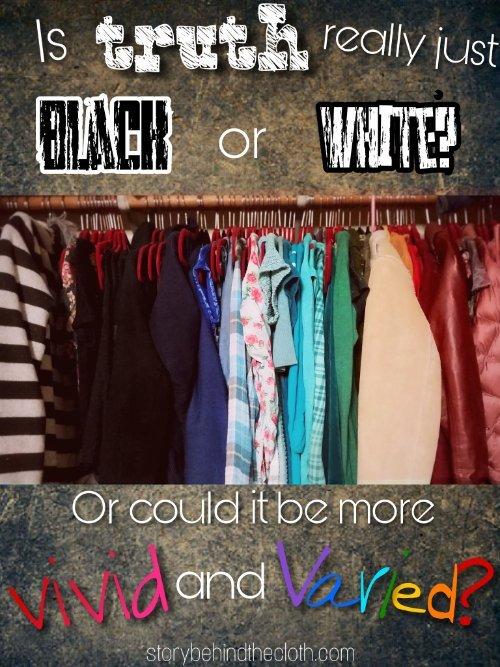 What do you think?

Can truth be thought of as a rainbow of various ideas?

My hope is that as we explore our own ideas about fashion and color, we will see and value the beautiful subjective truth in each other’s opinions. While also maybe finding deeper, universally shared truths that we can apply to how we wear what we wear.